In 1865 the Bundoran and Enniskillen railway opened, which was promoted by William Caldwell Bloomfield and others to transport Belleek Pottery.

The Great Northern Railway of Ireland was formed in 1876 with the amalgamation of most of the railways in the historic nine counties of Ulster.

The GNRI was a pioneer, developing diesel railcars as early as the 1930’s. Around 1950 the GNRI introduced a fleet of 20 diesel railcars forming 10 three car sets painted an attractive blue and cream. Some of these were to be seen in Enniskillen forming trains to Belfast.

The GNRI in common with other railways carried every conceivable type of goods from coal and cattle to newspapers, mail and parcels. The railway modernised the transport of bread by introducing special container wagons. The GNRI encouraged passenger traffic with excursions to Bundoran, mystery trains and the Hills of Donegal excursions.

Organisations such as the Orange Order chartered trains for the 12th July and Hibernians for August 15th. Sports fixtures such as G.A.A. matches and football finals meant the running of extra trains. The railway provided services until closure on 30 September 1957. 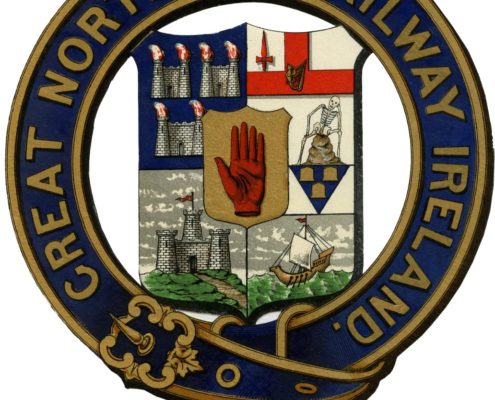 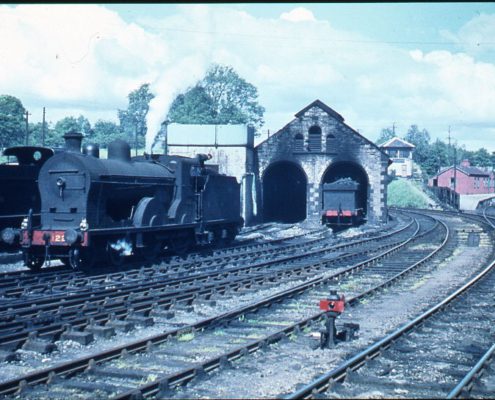 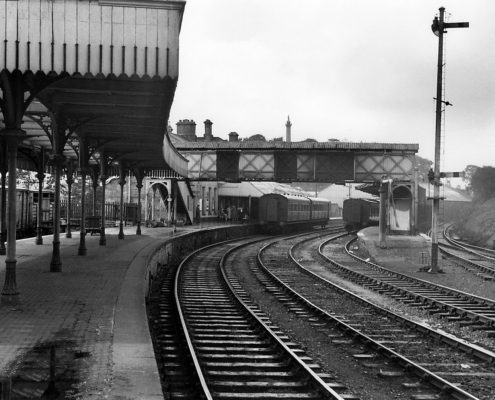 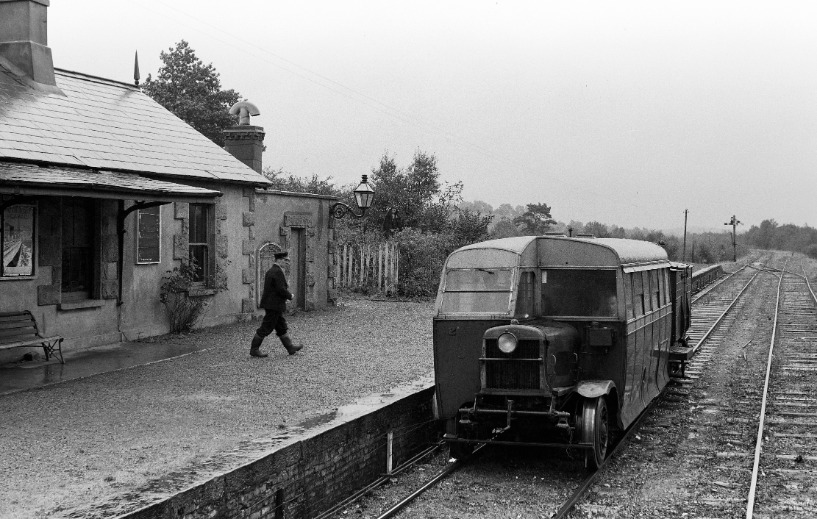 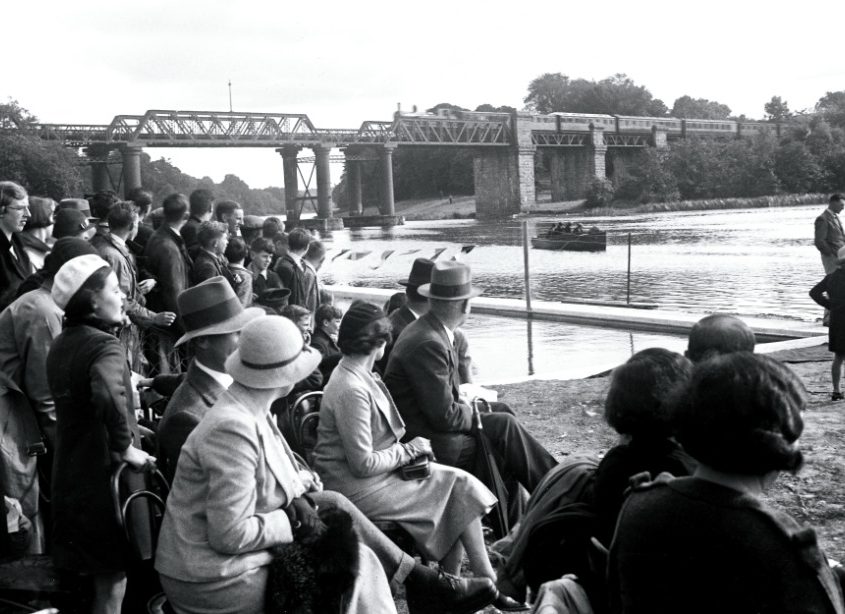 The Sligo Leitrim and Northern Counties Railway opened between Enniskillen and Sligo in 1876. The SLNCR was an important link to transport cattle from the West of Ireland to ports such as Belfast. This line served a rural area so goods traffic was mainly carrying meal and products vital to the agricultural community.

Passengers from the 1930’s onwards could normally be catered for by a diesel railbus, a converted road bus on railway wheels. In 1947 the SLNCR was able to afford to buy a proper diesel unit – Railcar B. Only excursion traffic required conventional carriages and a steam locomotive.

The SLNCR locomotives were of an unusual 0-6-4 wheel arrangement and were all named but never numbered. One locomotive named ‘Hazlewood’ survived from

1876 until closure in 1957. Later engines were ‘Lough Gill’ and ‘Enniskillen’. As late as 1951 the SLNCR acquired ‘Lough Erne’ and ‘Lough Melvin giving them the distinction of being the last Irish steam locomotives to be built.

The SLNCR had only a few stations in Fermanagh; it shared Enniskillen with the GNR and had stations at Florencecourt and Belcoo with a halt at Abohill, near Mullaghdun. From 1922 Belcoo was a border post with customs.

A small independent railway company that was never prosperous, it survived until 1957. Its larger neighbours the GNRI and Midland Great Western Railway at Sligo could not agree on who should take it over.

When the SLNCR closed in 1957 it was the last independent railway in the British Isles, all others having been nationalised.

In the early 1950’s the GNRI went bankrupt so was purchased jointly by the two governments for £4,250,000 to be run by them through the Great Northern Railway Board. In 1956 the N.I. Government announced that the Fermanagh lines would close. This was opposed by the GNRB, the Republic’s government, Fermanagh interests and the Ulster Farmer’s Union but to no avail.

On 22nd July 1957 the GNRB introduced a new fast 2 1/4 hour diesel express between Enniskillen and Belfast, to show the difference investment in modernisation could make, but even this failed to change government attitudes.

Monday 30th September 1957 was the last day that trains ran in Fermanagh. The last train to Clones left at 6.20pm followed by the last train to Omagh at 6.40pm. The last goods trains to Portadown and Omagh departed at 5.30pm and 9.30pm respectively.

The last arrivals ran into Enniskillen from Omagh at 9.25pm and from Clones at 10.33pm.

The SLNCR said farewell with the 7.25pm mixed train to Sligo hauled by Lough Melvin.

Many trains had their locomotives adorned with anemones – the flowers associated with remembering. Crowds gathered at the stations to say farewell to a much-loved way of life. The distinctive sound of a steam train passing under the Pound Brae or the rumble of the Sligo goods passing over Weirs Bridge and the unmistakable aroma of coal smoke would be no more in Enniskillen.

Many staff transferred to the bus or rail services of the UTA, while others left Fermanagh in pursuit of employment.

One year later on 1st October 1958 an auction of the assets of the SLNCR were held at Enniskillen and several locomotives and carriages were sold for scrap. The GNRI lines lay dormant until the demolition trains began to run early in 1960, lifting the lines from the border northwards. 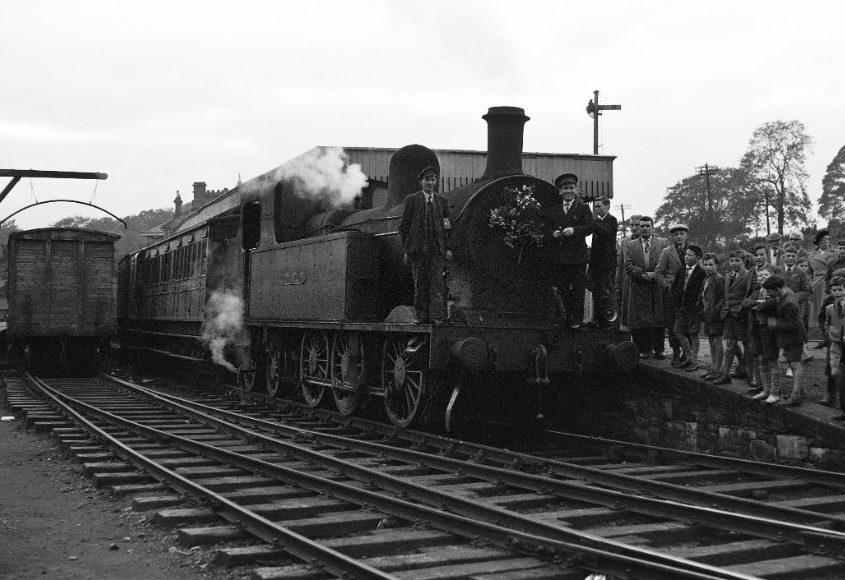 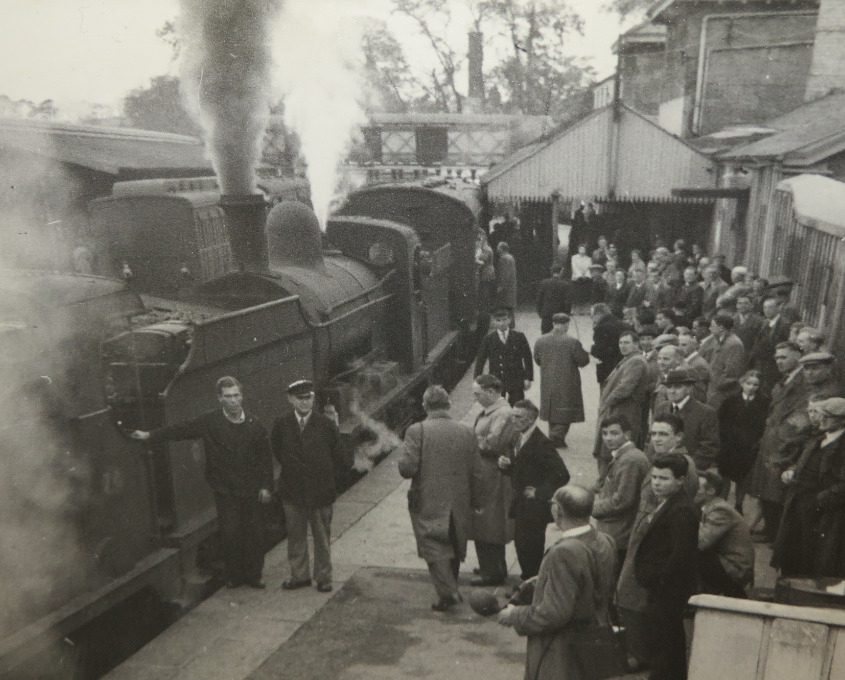 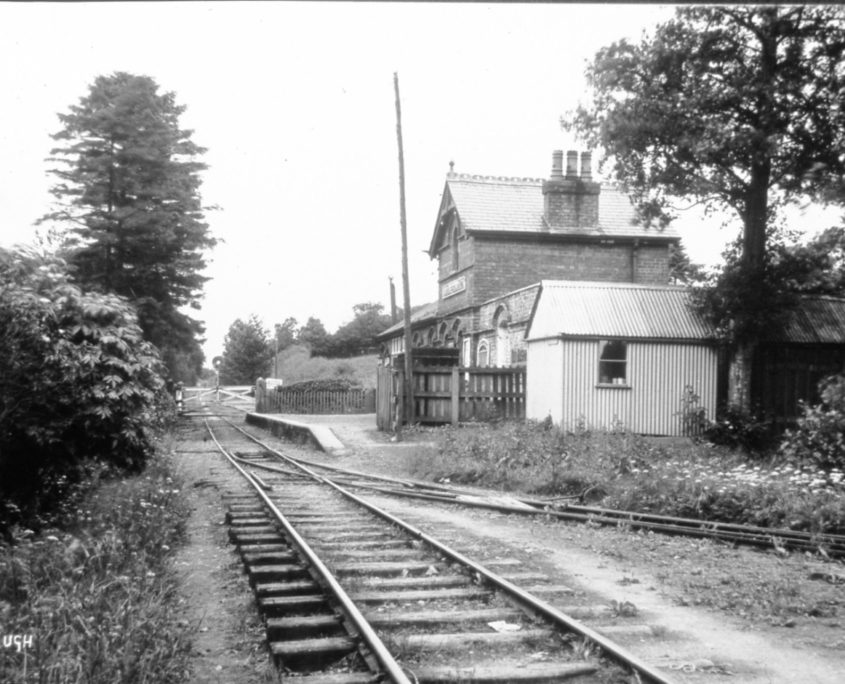 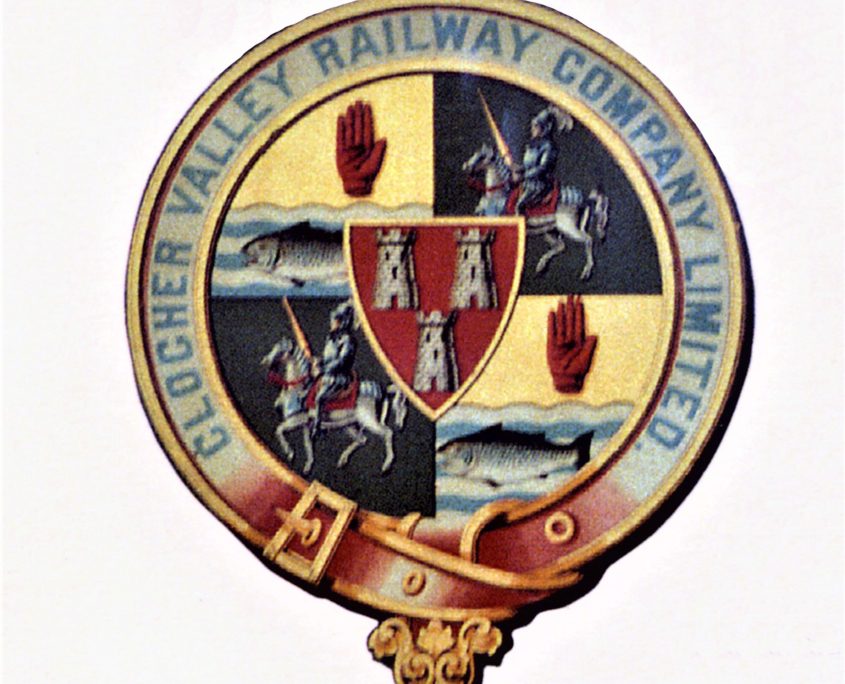 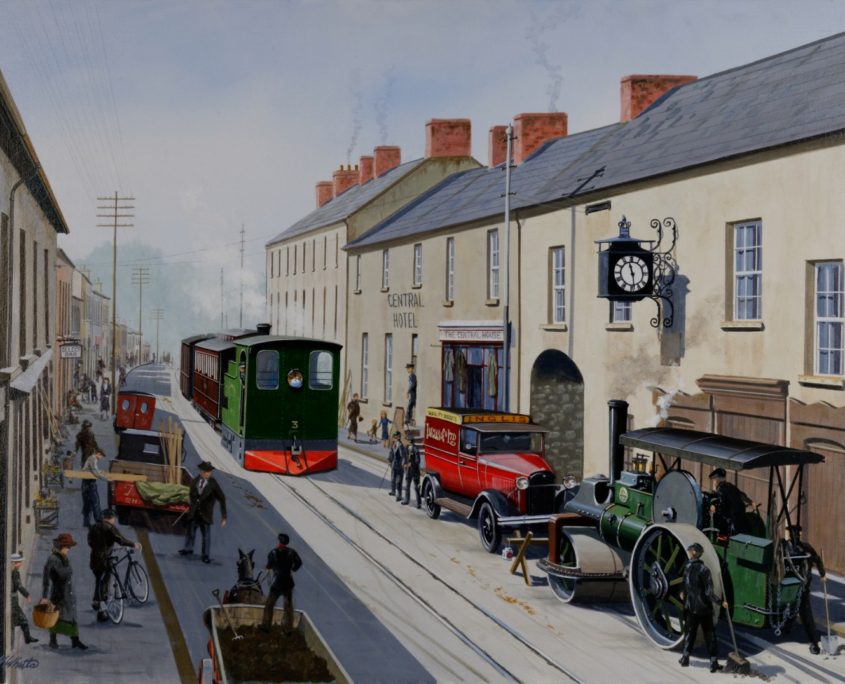 In 1884 work began on the Clogher Valley Railway (CVR). It opened in May 1887 and ran between Maguiresbridge in Fermanagh and Tyan in Co. Armagh providing connections at both stations with the GNR.

Unlike other GNR and SLNCR Fermanagh lines, the Clogher Valley was a narrow gauge line with track laid to the Irish narrow gauge of 3ft. A distinctive feature of the CVR was street running through the centre of Fivemiletown, Augher and Caledon and tramway features. In many respects, it was more a tramway than a traditional railway.

By the 1930’s the days of the Clogher Valley line were coming to an end as motoring and increased use of roads damaged the line and at the end of Dec 1941 the last train ran on the Clogher Valley. Shortly after, the track was lifted to assist in the war effort elsewhere and today only the elaborate red brick stations remain as sentinels to its past.

Looking to the Future!

The artist David Briggs was commissioned by Headhunters Railway Museum to paint Enniskillen station in 2012 as a Translink integrated transport centre. The scenario is that the track work has been rationalised in line with the diesel era.

On the left hand side of the painting the SLNCR goods yard is now the bus depot (with double deckers and a Goldliner) and the Sligo bay platform is now a single track-platform 1 and occupied by an Irish Rail 2600 “Arrow” class “2 car” set about to depart for Sligo. Platform 2 holds a 3 car NIR CAF 3000 set about to depart for Omagh when the conductor gets the wee woman with her shopping bags on board!

The centre road has been removed which allows the island platform to be widened with an Irish Rail 22000 class Rotem railcar set on an “up” Bundoran Express appearing on the curve in the distance.

The “back of the wall” siding is now a new Platform 4 (the “wall” has been removed) and is occupied by an NIR GM locomotive and ballast train, diverted temporarily into it to allow the Bundoran Express to overtake and the crew take the opportunity to lounge on the platform! You will observe Lidl’s in the distance and Cole’s monument observing the scene as always.

The footbridge now has lifts for disabled folks in line with all main stations and electronic destination boards on platforms, and security fencing complete the scene. 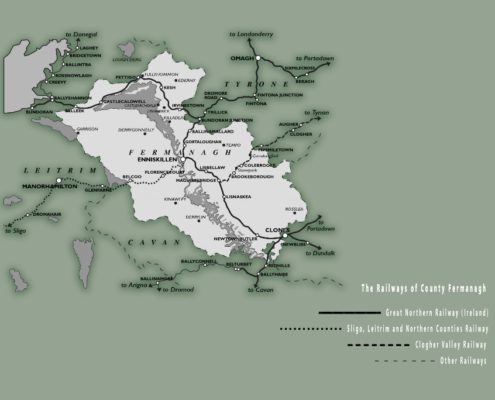